When Pornography Creeps Into Your Marriage 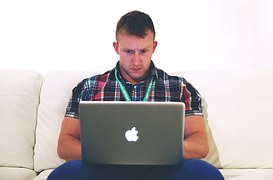 When Pornography Creeps Into Your Marriage

I know the picture attached to this blog post is a man that is viewing his computer. But pornography is not just a problem that men deal with, there are also women who deal with pornography as well. I wanted to touch on this subject because I feel that many marriages deal with the issue of having pornography in their marriage.

It wasn’t too long ago, a friend of mine and I were talking to each other. She told me that her and her husband had a major issue in their marriage. I surely wasn’t expecting to hear that pornography was the issue..but it was. She admitted that her and her spouse had really hit a drought in their marriage after they had two children together. They were trying different things to spice up their marriage and so that led them to the sex store! While in the sex store, a video was playing. Her husband recommended maybe they buy one (a video.) So, they did. This really spiced up their marriage. Now, 4 years later, she still catches her husband viewing pornographic videos and she was getting her spiciness from romance novels, 50 Shades of Grey, ect. Since they had started reaching out for spiciness in their marriage, they have gotten out of church. They know what they are doing is wrong, but they just can’t stop.

I wanted to share this story, not to air my friend’s dirty laundry, but to let the readers know that it can happen in any marriage. It can happen to men and women who attend church. It can happen to pastors. Many people have this issue and being male or female is no an issue! ‘

Many people will not admit that they are having this issue because they are embarrassed. It is like talking about sex, it is personal and nobody wants to talk about it! If you or your spouse is having an issue with pornography in your marriage, here are several tips of advice for you!

Seek help! If you are having an issue with pornography, be open about it with your spouse. There are many Christian counselors that are willing to counsel with you and your spouse because they deal with a lot of issues like this! Most Christian counseling in the church is free, especially if you are already a member. Don’t try to hide your secret. I am not saying go yell it around the world, but don’t keep it to yourself either.

Pornography usually creeps into someone’s life at a young age. When a young man (or woman) catch that glimpse of a pornographic image, they become addicted. Sometimes they can contain it, but then they think about it later in life. The issue follows them through life! Seriously! Other times, pornography creeps into marriages when there is a drought in the bedroom. Either the man or woman seeks more spiciness or like my friend’s case, they viewed it together. Men and women who seek pornography, whether it be books, magazines, videos, ect, means that they are lacking something in their marriage and once pornography wears off, affairs start happening because pornography can only remain exciting for a short period of time.

Pornography can be a major issue in a marriage. If you or your spouse are dealing with pornography. Seek help. It’s so hard to kick the habit and pornography addiction when pornography is literally at our fingertips. It pops up on our computers, there are apps for it, it is on television (whether we realize it or not!)

Steps that you can take when helping your addiction to pornography:

Please, share this post. If you know someone is dealing with pornography, share it with them (privately.) If you need prayer, please don’t forget my prayer wall. You can be added to the prayer wall anonymously.